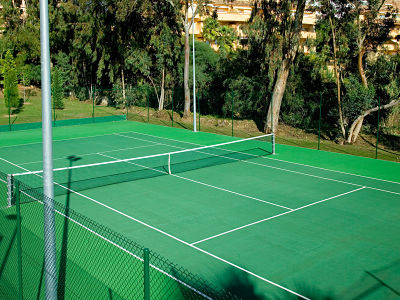 The first round of the world’s greatest team tennis tournament takes place in Marbella in early February with an encounter between two of the world’s most famous tennis-playing nations. Great Britain faces Spain in their first Davis Cup play-off since 1986. The celebration of the Davis Cup in Marbella reaffirms the Costa del Sol’s status as one of the top sporting destinations in southern Europe.

Puente Romano plays host to the Davis Cup in Marbella

One of the most iconic sporting venues on the Costa del Sol, Puente Romano Tennis Club, will host the 3-day event from 1 to 4 February. The clay courts are already in perfect condition and the Club has installed extra seating for the expected 8,000 spectators at the first round of the Davis Cup play-off.

Team Spain at the Davis Cup in Marbella

Leading the Spanish team is captain Sergi Bruguera who is joined by something of a dream team. David Ferrer, Feliciano López, Albert Ramos, Pablo Carreño and Roberto Bautista are the chosen five who along with Bruguera will face Great Britain in just over a week’s time.

The world number one Rafa Nadal has declined participating the first-round of the Davis Cup. He, along with many of the world’s top players, is currently in Melbourne participating in the Australian Open. The Spanish team don’t rule out Nadal joining them at later stages in the Davis Cup, but Spain’s best player hasn’t played in the team since 2011.

Rising local star Alejandro Davidovich will take part in the Davis Cup training sessions, however. Davidovich who was last year’s Wimbledon Junior championship will be part of the sparring practice for the Spanish team. In his first year on the ATP circuit, Davidovich ranks 488th in the world and is the 41st Spaniard.

Team GB at the Davis Cup in Marbella

Again, like the Spanish Davis Cup team, Great Britain will also be without their star player. Andy Murray is currently injured and therefore unable to play. However, the British captain who is confident he will able to lead his country to victory in the first-round play-off.

Great Britain is chasing its 11th Davis Cup title. The team gained their most recent in 2015 against Belgium and are seeded third in this year’s championship. Spain and Great Britain haven’t met in the Davis Cup tournament since 1986 when Britain won 4-1.

The Costa del Sol makes an ideal choice for a Davis Cup competition in February and Marbella and the Costa del Sol enjoy a pleasant winter climate with perfect conditions for playing tennis.

Marbella offers some of the best sporting facilities on the coast. The area also has trusted experience in organising major events at both national and international level. The Puente Romano Tennis Club has a long-established reputation as one of the best tennis clubs in Spain and regularly hosts world-class tournaments.

The local authorities expect substantial revenue from the Davis Cup tournament. The last time Marbella hosted the event (in 2009 against Germany), the resort received some €10 million in revenue. As well as placing Marbella centre stage on the world sporting arena, the Davis Cup will also give visitors the chance to discover the resort’s other sporting attractions for themselves. These include a long list of prime golf courses, some of which rank among the best in southern Europe.

Tickets for the Davis Cup in Marbella

Season tickets for the 3-day event cost from €80 to €200 and are available from the Corte Inglés. Day tickets and single match tickets are not available.

Why not combine world-class tennis action with a round of golf on one of the best courses on the Costa del Sol? Stay at the Rio Real boutique hotel and make it a sporting break to remember!