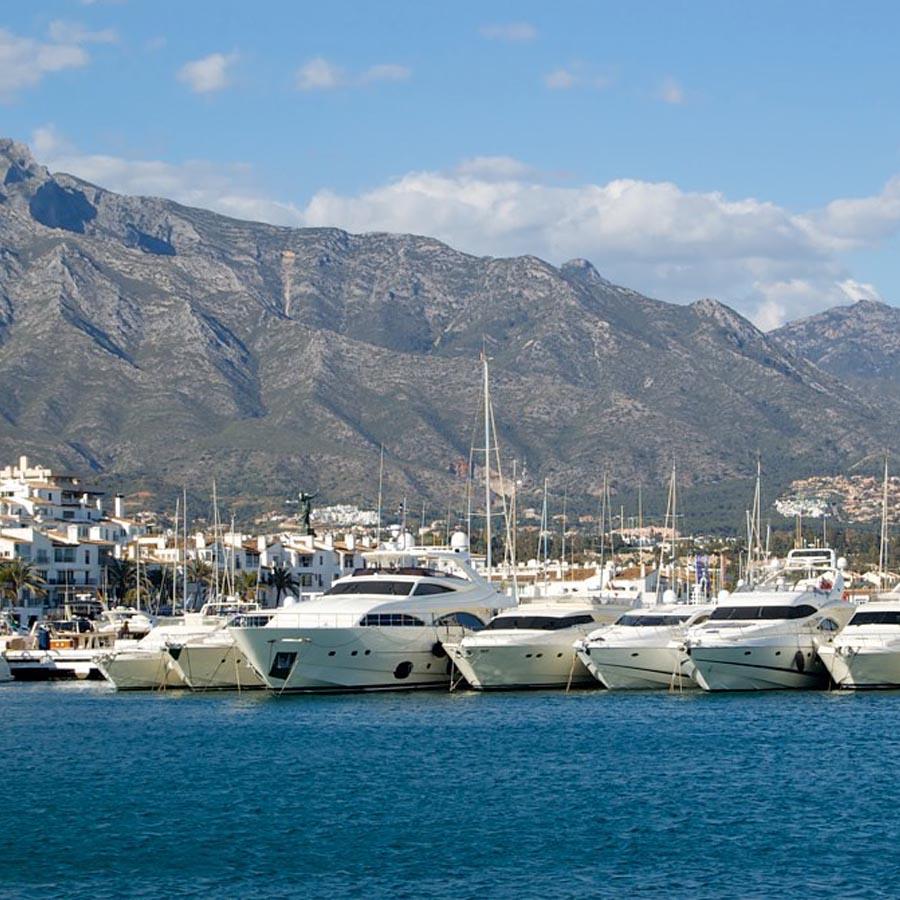 2020 celebrates Puerto Banús 50th anniversary and the iconic marina on the Costa del Sol has plenty of plans to mark the occasion. Since its opening in 1970, Puerto Banús has attracted the world’s rich and famous, earning itself a place among the most exclusive destinations on the planet. In this article, we take a look at its history and track record over the last 50 years.

When entrepreneur José Banús first set his sights on Marbella, his original plans were to build an exclusive development at Nueva Andalucía. When his path crossed with Noldi Schreck, those plans grew to include one of the world’s top marinas.

Schreck, an architect famous for designing Beverley Hills, inspired Banús to expand his vision. The new project was just as exclusive, but considerably more ambitious and included an international outlook.

Between the two, Banús and Schreck conceived the idea of a Mediterranean-style development, flanked by wide boulevards and tropical gardens. The marina would house the world’s finest yachts.

Did you know? Puerto Banús is just a short drive from Rio Real Golf & Hotel.Stay at our resort and combine the peace and quiet of one of the finest golf courses in Marbella with a visit to the glitz and glamour of the marina.

From its very inception, Puerto Banús has been a honeypot for celebrities. At the opening party, attended by over 1,500 people, the guests of honour were Rainier of Monaco and Grace Kelly. Julio Iglesias provided the musical entertainment to the rich and famous celebrating the inauguration of one of Europe’s most exclusive marinas.

Since then, the stream of famous faces has been continuous. Liza Minelli, Audrey Hepburn, Lola Flores and Sean Connery are just a few from the stage and screen. Royalty and aristocrats have also made Puerto Banús their favourite destination.

And more recent star appearances have come from Lady Gaga and Cristiano Ronaldo. To celebrate Puerto Banús 50th anniversary, the marina has chosen Lady Kitty Spencer as its ambassador. Spencer represents several luxury brands including Dolce & Gabbana but is most famous as Princess Diana’s niece.

Did you know? Río Real Hotel corridors are lined with pictures of Marbella’s celebrity visitors since the 1960s. Find out who’s who here.

Luxury at its finest

Right from day one, Puerto Banús has gone hand in hand with luxury. Its berths have welcomed the world’s biggest yachts. In the past, they included the Nabila and Giralda. Nowadays, you’re likely to see the Azteca, Solandge or Taiba superyachts moored alongside the Mediterranean development.

Luxury fashion and design takes pride of place too. Just about every high-end brand is represented and more arrive every year. “We want to increase our portfolio of luxury brands even further if possible,” said Juan Nuñez-Insausti, quoted in EuropaPress. Expected for 2020 and in time for the Puerto Banús 50th anniversary are Fendi and Moncler.

Over the last half century, Puerto Banús has consolidated itself as one of the icons of luxury in Spain. In 2019, Engel & Völkers ranked it the most exclusive marina in Spain and everything points to this reputation continuing for at least another 50 years.

For our part, we’d like to congratulate the Puerto Banús 50th anniversary. Most definitely a golden moment for Marbella and the Costa del Sol.

Did you know? Our golf course, designed by Javier Arana, opened in 1965 and is considered one of the pioneers of golf on the Costa del Sol. Discover our emblematic course for yourself when you play our 18 holes. Book your round now.